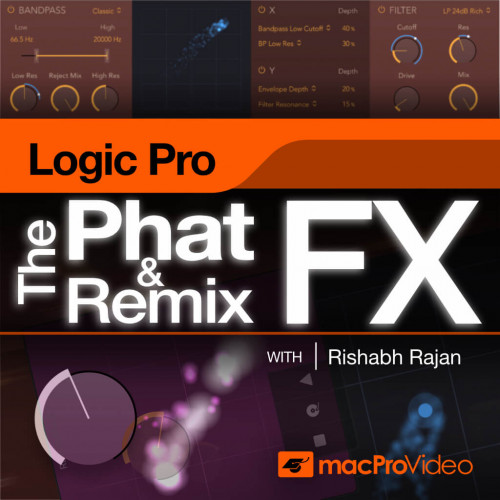 MacProVideo Logic Pro 213 The Phat FX and Remix FX TUTORiAL-ADSR
English | Size: 275.45 MB
Category: Tutorial
Delays, reverbs, compressors, distortions... Logic Pro has so many built-in plugins, it's so easy to forget about many of them. Some often overlooked plugins are found in the Multi FX section because they combine multiple effects into one. This course takes a deep look at two Multi FX plugins: the Phat FX and Remix FX.

Rishabh starts by looking at the Phat FX plugin. He covers every control of the plugin, and demonstrates its amazing potential. As you will see and learn, this multi-FX powerhouse is perfect for adding everything from adding subtle analog warmth to creating high gain distorted madness. And thanks to its built-in Envelope Follower, LFOs and X/Y pad, it can also add interesting movement to any production.

The second part of the course is dedicated to the Remix FX. This flexible Multi-effect plugin is specifically targeted at DJs and electronic musicians who want to inject some typical DJ style effects into their dance music tracks, but it can be used in other genres as well. Again, Rishabh takes a deep look at the creative possibilities offered by the plugin. He shows you how to filter, gate, reverse, and scratch your full mix or individual tracks. He also explains how to use and configure the two X/Y Pad, how to combine effects, how to record the parameter changes in your arrangement, and more...

So sit back and join Logic Pro expert Rishabh Rajan in this course as he unveils the immense sonic possibilities offered by the Phat and Remix FX!